If you’re short on time in Venice, use this checklist to make sure you’re taking in everything the city has to offer – from gondola rides to the Carnival.

Built across 118 islands, the Floating City is an urban wonder of the world, where canals replace streets and gondolas act as the most romantic taxi imaginable. Known affectionately in Italy as La Serenissima (meaning ‘most serene’) Venice is a fantastic place decorated with magnificent architecture that you have to see to believe.

You’ll need a checklist to make sure you’re seeing the best of what this amazing city has to offer – so here are our top ten Venice attractions to explore.

The city’s biggest square is your first port of call. Instantly recognizable, it’s where locals and tourists gather to gaze upon the city’s majestic architecture over a coffee, and to visit St Mark’s Basilica, which towers over the area.

Built in the 11th century, the cathedral looms large, and the pigeons fluttering past present one of the many perfect photo opportunities Venice has to offer.

Inside, it’s even better. You have to check out the Byzantine art treasures and the 4,000 square meters of gold mosaic. The jewel-adorned altar is a particular highlight. Take the elevator to the bell tower to enjoy one of the best views of Venice. 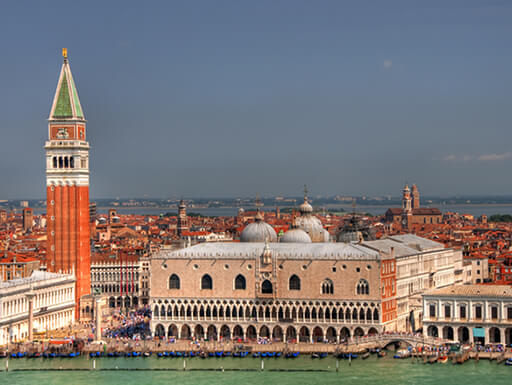 During the time of the Venetian Republic, magistrates known as Doges ruled the city. Dating from the 14th century, the stunningly vast Palazzo Ducale was both the residence of the judges and the city’s administrative center. Its colonnades and façade of pale pink marble reflecting in the water make for one of Europe’s most spectacular sights.

Inside, the Golden Staircase and Tintoretto’s Paradise – the largest oil painting in the world – keep your jaw hanging open in wonder. Then there’s the Secret Itineraries tour, which allows you to view the torture chambers and cross the Bridge of Sighs to the very prison cell from which Casanova escaped in 1756.

Perhaps the most dramatic route into any city, this main artery of Venice’s canals connects arrival points from the mainland to St Mark’s Square along a two-mile stretch. Only four bridges cross it, the most famous being the 16th century Rialto Bridge. This iconic structure dates from 1591 and was such an ambitious design at the time that critics assumed it would collapse.

Hop on a gondola and sail past the façades of the many grand residences lining the Canal – it offers a uniquely regal experience you won’t get anywhere else. 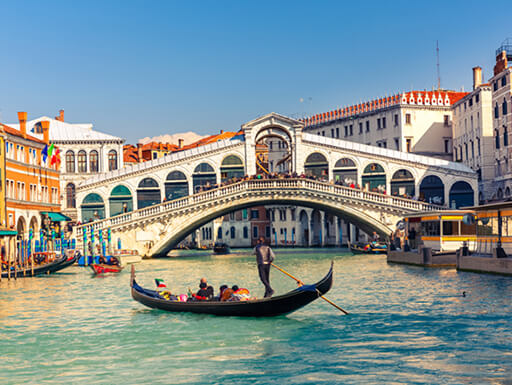 It’s perhaps no surprise there are so many art galleries in a place so picturesque, and why not start at the best gallery in town? It has an enormous collection of stunning, perception-changing works by the Venetian greats, spanning the 15th to 18th centuries.

The former convent on the south bank of the Grand Canal was first used by Napoleon to house his haul of art. You can trace the evolution of styles as you’re going around – and you should definitely check out Madonna and Saints by Giovanni Bellini, Portrait of Christ by Vittore Carpaccio, Pietà by Titian, and Tintoretto’s Cain and Abel.

This pink and white Gothic building used to have a façade of gold, which gave it its name. Although this is long gone, it remains a truly awe-inspiring structure. Inside is the Museo Franchetti, a collection of paintings, sculptures and ceramics that were donated to the state in 1922.

The collection includes works by the likes of Titian, Mantegna, Van Dyck, Tullio Lombardo, and Bernini – illustrating the fire and passion of the Renaissance.

As a city of many islands, no trip to Venice would be complete without exploring the neighborhoods that lie outside its center. Cross the water to Murano, most famous for its fascinating glassblowing workshops.

Originally located here to reduce the risk of fire in the main city, there are still countless studios and showrooms to admire. Don’t miss the Glass Museum, which showcases the most exquisite and mind-blowingly intricate works from the Roman times to the present day.

Other highlights of Murano include the Byzantine style church Santi Maria e Donato and the paintings inside the 14th century San Pietro Martire. Hop over the water to the adjacent island, Burano, famous for its lace making, making sure to visit the lace school Scuola dei Merletti and its museum.

This grand 17th century church, known locally as La Salute, is located where the Grand Canal reaches the Venetian Lagoon. It’s a spectacular white building with an opulent dome, constructed as a shrine to the Virgin Mary following the Great Plague.

The altar sculpture depicts the Madonna driving a demon Plague away, and it’s as moving as the spectacular art inside – an extensive collection that includes works by Titian, and Old Testament scenes which adorn the magnificent ceiling.

Local artist Tintoretto famously won the competition to paint the ceiling of this white marble building. He cheekily placed a completed work in front of the judges when they had requested only sketches, and many of his defeated contemporaries never forgave him.

The walls and ceilings are adorned by his artwork, including a full life story of the Virgin Mary – which serves as a bewitching backdrop from spring to fall, when it hosts baroque concerts. The depictions of the New Testament in the Upper Hall become increasingly dark, reflecting the troubled times of the Great Plague, which claimed a third of the Venetian population. The Crucifixion is a particularly thought-provoking masterpiece.

Used as a setting for the 2005 movie Casanova, this building epitomizes the grandeur of 18th century Venice with its symmetrical marble façade of rounded arches.

The palace was designed by baroque master Baldassare Longhena, and the museum today contains glorious paintings, intriguing Flemish tapestries and impressive ceiling frescoes. The costume collection and silk wall coverings are a particular highlight, showcasing the vital importance of silk to the Venetian economy. 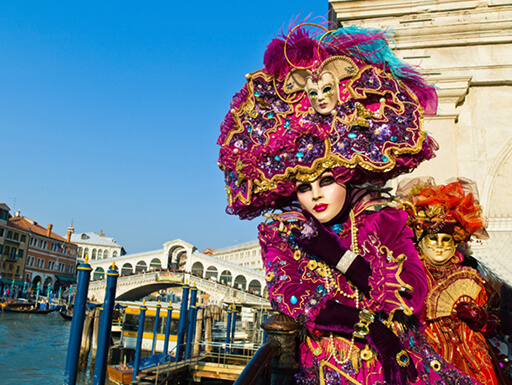 If you’re looking for something else that makes Venice what it is, you’ll find it at carnival time. Rio de Janeiro may be thought of as the home of the carnival, but it was the Italian city that first started the celebration in the 12th century.

After a long absence, the Venice carnival returned in 1979. Highlights of the dazzling event include the elaborate costumes and masks worn by revelers, the fanfare of local music and, of course, plenty of truly delicious dishes.

Originally used to hide their extravagant behavior from each other, the masks are now a focus of the carnival and competition for the most elaborate is fierce.

If you’re looking to make your visit to this remarkable city even more memorable, the carnival period – which usually lasts for a little over two weeks in January or February – is the time to go, joining some three million revelers.