An Italian city of rugged beauty and dramatic buildings, with Mount Etna looming, our top 10 Catania attractions bring you the best of the Sicilian city.

Catania is the spirit of Sicily brought to life. Baroque squares, hearty restaurants, and a genuine uniqueness mean this is no cookie-cutter destination. In the shadow of Mount Etna, you’ll find life unspoiled by major tourism with the bustle of a confident city going about its business. Our top 10 things to do in Catania will take you to all the right places, from grand piazzas to Roman remains and high-end shopping areas. With a skyline punctuated by domes and a historic UNESCO-listed center, this is a slice of pure Italy.

The heart of Catania’s historic old town, the Piazza del Duomo isn’t just packed full of fascinating monuments, and buildings. It also carries the spirit of the city. It’s a UNESCO World Heritage Site and is home to both the Duomo di Catania and majestic Cattedrale di Sant’Agata. Alternatively, the much-photographed Fontana dell’Elefante – the Elephant Fountain – combines a Roman-era elephant made of black lava with Egyptian elements. It’s a stunning centerpiece. It’s not the only fountain here, either. You’ll find another in the square’s corner, close to the fish market. 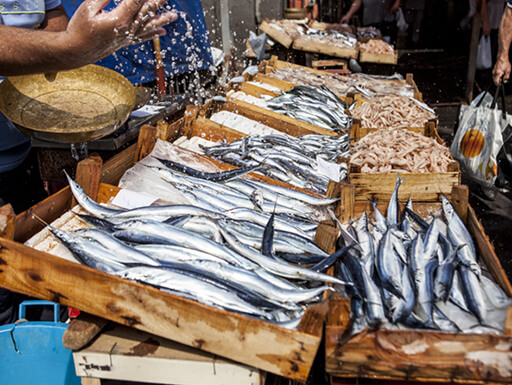 Catania’s famous fish market – La Pescheria – is a must-visit, even for non-seafood fans. It’s a riot of noise, fresh color, and the lively bustle of stallholders and buyers. There’s no room for the timid – this is where you’ll find Italian grandmothers haggling over the price of the day’s catch as fishmongers gut fish for their customers. Piles and piles of glistening fish are everywhere you look – the perfect place to pick up some squid, swordfish, or sea urchins.

Very much the main drag in Catania, Via Etnea is a thoroughfare that links the base of Mount Etna with the city and Piazza del Duomo. There’s plenty to do, from brilliant local restaurants to numerous department stores, as well as independent boutiques and cafes. As you progress along, you’ll go past churches, bars, palaces, and peaceful side alleys. Stop for a coffee in Piazza dell’Universita with its grand buildings or soak up the calm landscapes in the park Giardino Bellini. The juxtaposition of the old and the new is what makes it so invigorating. With the car parked for the day, there are so many new places to try an Aperol spritz and people-watch, right next to traditional cake and biscuit shops, like Piazza Placido’s I Dolci di Nonna.

Join the locals in the summer by heading for the city’s beach – San Giovanni li Cuti – formed of black volcanic rocks and sand. It’s brimming with local fishermen who still use the small harbor here to moor their fishing boats. Arrive at the right time of day and you can see them set out or land their catch. It’s also lined with restaurants and cafes, ideal for fresh seafood or traditional Sicilian pasta dishes.

The exterior is elegant while the interior opulent and extravagant. Bellini’s legacy is captured in the Bellandi-painted ceilings that bring to life four different operas from the composer. The man known as the Swan of Catania died in 1835, but the opera house still opened with a performance of his Norma. Outside, it’s a baroque building in keeping with the others on the piazza, while inside it boasts a marble foyer called the Ridotto. It’s one of the most stunning opera houses in Italy, if not Europe, and still runs an extensive program of Bellini and beyond. 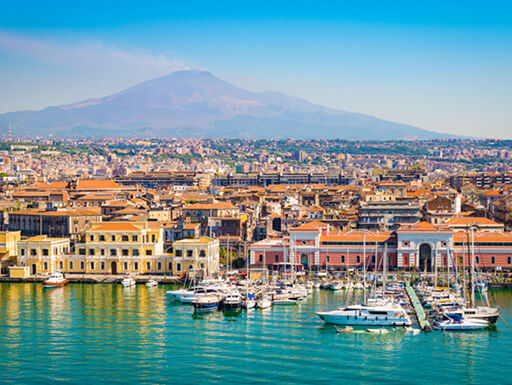 Mount Etna is the biggest active volcano in Europe, one that has wrought devastation on Sicily several times over the years. It towers some 11,000 feet high and is almost constantly active. However, that doesn’t mean life doesn’t flourish nearby. For example, there is a beautiful park – the UNESCO-protected Parco dell’Etna – that surrounds it. At the base, you’ll find orchards, farms, and vineyards, while there are also small villages for you to explore. The volcanic landscapes are nothing less than breathtaking, and the views from near the summit are unbeatable.

Catania was founded by the Greeks thousands of years ago, but Etna’s eruptions have destroyed or buried much of the history. Excavations over the last century have unearthed some remarkable ruins, such as the captivating second-century Roman theater at the Parco Archeologico Greco Romano. It’s not entirely uncovered, but that only adds to the allure as it’s surrounded on all sides by occupied buildings in a traditional neighborhood. You can browse the many artifacts uncovered on the site at Casa Liberti nearby.

See three major sites in one go by heading to the Complesso Monumentale Monastero delle Benedettine. There’s a small, contemporary art gallery inside an old abbey, the Museo Arte Contemporanea Sicilia, and a huge Benedictine monastery.
Add in the Church of San Benedetto and you’ve got a corner of the city packed full of contrasting, but complementary, architecture. Wander the cloisters of the monastery, then head to the 18th-century church for some phenomenal frescoes, paintings, and ornate decoration.

While many major buildings in Catania have been destroyed by either volcanic eruptions or catastrophic earthquakes, Castello Ursino has been standing proud since the 13th century. Even when Etna’s lava filled its moat in 1669, the castle remained in place. It’s a museum now but, over the centuries, it has been both a prison and a palace. Step inside for ancient artwork and magnificent relics.

While Via Etnea may be the most famous street in Catania, there’s little doubt that Via Crociferi is the most handsome. It’s lined with gorgeous churches and buildings built in baroque and Benedictine styles. It’s where you’ll find the Church of San Benedetto, but also Villa Cerami and the imposing arch of San Benedetto. Streets don’t come any prettier or more historical than this.

Tell us on Twitter about your favorite places to go in Catania.