Endless sunshine, colorful, scented flower markets and unrivalled French glamor all await in our top 10 guide to what to see in majestic Nice.

So plentiful are the highlights of Nice, France’s capital of glamor, that choosing just 10 things to see in this artistic and historic city is a near impossibility.

It’s a place steeped in modern day elegance that also gives a knowing nod to its artistic past, showing off its mix of the old and new in a way that only the glitz of Nice could. There’s so much to see and do in Nice beyond a top 10, but this list is a great place to start. 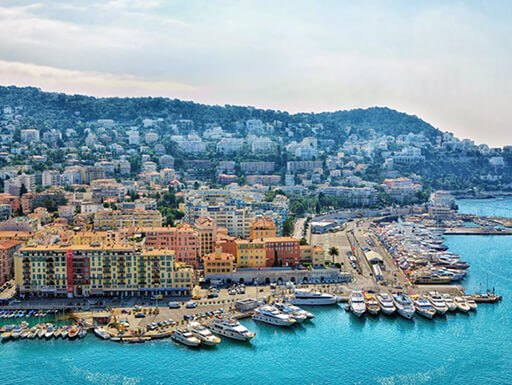 For many, Nice is the French Riviera, and it has been a popular place to visit ever since the British aristocracy began to make a beeline for the region in the late 18th century. Nice is the largest city on this pristine coast, but there are other places only a short trip away that will really round off your stay, each boasting its own unique character.

Cannes is wonderful, especially away from the crush of the film festival, or you can join the jet-set at St. Tropez and relax in the soft sand of Juan-les-Pins. All along the coast, you’ll find the azure blue waters that give the Côte d’Azur its name, as well as seemingly endless sunshine and French style in abundance.

Henri Matisse was inspired, died and buried in Nice, and the career of this titan of the art world is celebrated at the Musee Matisse. Climb Cimiez Hill to the charming 17th century Genoese village and you’ll find a comprehensive collection that starts at the close of the 19th century and continues through to his final works after WWII.

With sculptures, paintings and tapestries, as well as a rolling program of exhibitions, it’s a great way to immerse yourself in the works of one of the greats. Afterwards, wander over to the Monastere Notre Dame de Cimiez cemetery opposite to see his grave.

Much of modern-day Nice was added on once the influx of overseas visitors began. For an authentic Nicoise experience, explore the old town, known as Vieux Nice. The narrow streets are colorful and labyrinthine, packed with local shops as well as those with a keen eye for the tourist trade.

You’ll chance upon opulently-decorated chapels, such as the 18th century Chapelle de la Misericorde, while the pharmacy on the ground floor of the 17th century Palais Lascaris is also a must-see.

The bustle of the old town is magnetic, with delis and quirky shops, the wafting smells of Provencal cuisine and authentic cafés that are the perfect place to catch your breath and watch this part of the world go about its business.

At the heart of Vieux Nice is the Cours Saleya, a riotously colorful market square that has hosted a flower market – the marché aux fleurs – since 1897. Hemmed in by fine buildings, it’s where the people of Nice come to meet, chat and bask in the scents and aromas – not just of flowers, but also food.

Many wholesalers have moved elsewhere, making room for wonderful food stalls, so you can pick up a bouquet and browse a boulangerie at the same time. Oysters are freshly shucked, the smells are intoxicating, and this always teeming square even hosts an antique and flea market every Monday.

The Promenade des Anglais earns its name from the British expats who paid for it to be built in the early 19th century. They saw it as the perfect place to take in the air and enjoy the views – and they were right. Even today, many visit Nice just to saunter down the seafront, all five breathtaking miles of it.

It can be rather more hurried than in times gone by, with bikes, scooters and skates joining those taking a serene stroll, and the view inland varies from lovely art deco remnants to more utilitarian office blocks and hotels. The view out to sea, however, is sublime and unblemished all along the promenade.

There has long been a strong Russian community making its home among the Nicoise, with the wealthy joining the British in relocating to the stunning Riviera. The Orthodox among them needed a place to worship, and the Cathédrale Orthodoxe Russe St-Nicolas, started in 1902 and finished in 1912, was born as a result.

The numbers of worshippers were bolstered by the emigrés from the Russian Revolution, and today it’s not only a popular attraction but one of the most stunning examples of an Orthodox church to be found anywhere outside of Russia’s borders. The exterior with its fine examples of turrets and cupolas, is worth the visit alone.

It might not have the tempting scents or colors of Cours Saleya, but Place Garibaldi, close to Vieux Nice, is a more relaxed and quietly beautiful place to visit. It sits at the crossroads of many of Nice’s main roads, but the arcaded buildings that border the square give the place a sense of stately calm.

It’s home to Grand Café de Turin, here for over 100 years and renowned throughout the city for its fresh seafood platters.

Close to Nice in Cagnes-sur-Mer, you’ll find the military stronghold turned art museum Chateau Musee Grimaldi. Constructed as a fort in 1309 by Rainier Grimaldi, his ancestors transformed it into a residence in the 17th century, before it became a museum and historic monument in the 20th century. The interiors, views and interesting art exhibitions alone make it well worth the short journey.

If you want to get away from the sea, sun and fast-paced lifestyle of Nice, then Parc Phoenix provides a different kind of experience entirely. It combines a zoo and botanical garden, mostly contained within the vast greenhouse called the ‘Green Diamond’. Ideal for families, here you’ll encounter tropical climates, exotic birds, swans, pelicans, ducks, rare orchids and other plants. You’ll find this oasis in the city at the east end of the Promenade des Anglais.

No list of things to do in Nice is complete without a visit to the Basilique Cathédrale Sainte-Marie et Sainte-Reparate de Nice. Reparata is the city’s patron saint and the current cathedral was built in the 17th century. It’s both ornate and peaceful, with intricate Baroque elements that are worth a visit alone.

What’s your favorite place to spend time in Nice? Let us know about it on Twitter.