Home / Travel / Things to Do / Three Perfect Days in Frankfurt

Follow this handy guide to Frankfurt, and ensure you see everything in your three days in this magnificent city, both medieval and modern all at once, from shiny city skyscrapers to old town charm.

Vibrant Frankfurt is generous to its visitors. It extends a warm welcome and beckons you to its old town, but it’s also a place of serious commerce and business. In Germany’s west, you’re close to both the Black Forest and the Rhine Valley, while medieval towns surround it if you plan to head out of town. Not that you’ll need to – there’s so much to see and do in Frankfurt itself that we’ve boiled it down into a tight, three-day Frankfurt sightseeing guide so you can really maximize your time here.

Use it as inspiration or a starting point before discovering your own unique places and creating your own memories of this city of contrasts. 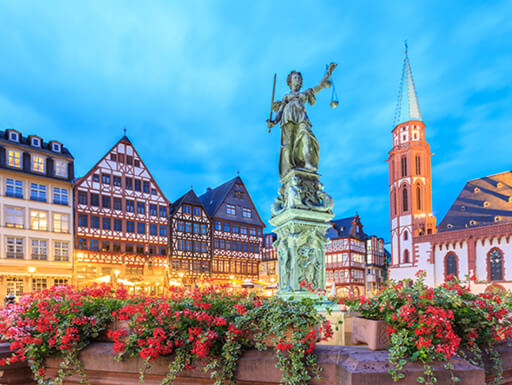 Day One – Rebuilding the renaissance

While most older cities are preoccupied with preserving the past, Frankfurt is very much concerned with recreating it. In the aftermath of WWII, it was a city of ruins, treasures of the past scattered to the winds. It must have been tempting to start anew with purely modern buildings, but the residents instead decided to recreate the very best of Frankfurt.

Start your visit here by wandering the Altstadt, Frankfurt’s old town. Romerberg square is at its heart, sporting reinvented halls and half-timbered buildings, statues and cafés. Visit Romer city hall and try to unlock the mystery of where it picked up its Roman-inspired moniker, or ready your camera at the Fountain of Justice – an unmissable photo opportunity. The 1543 bronze statue of Justitia, the Roman Goddess, dominates the square from her pedestal.

Eaten yet? Haus Wertheym is the only one of the original half-timbered Romerberg buildings that survived the war. In fact, it has stood strong since 1479. It’s popular, but drop by at a quieter time to enjoy glorious goulash, Wiener Schnitzel and a hot sausage plate with sauerkraut.

From here, you’re only a very short stroll from Paulskirche – the stunning, spire-tipped 18th-century church that became the symbol of the birth of German democracy. The imposing Gothic edifice of the Kaiserdom, a reconstructed ode to Frankfurt’s Middle Ages cathedral, is also close by. Head inside to see the haunting skull altar and brave the heights by climbing the 324 steps to the top of the tower, where you can enjoy epic views of the city. 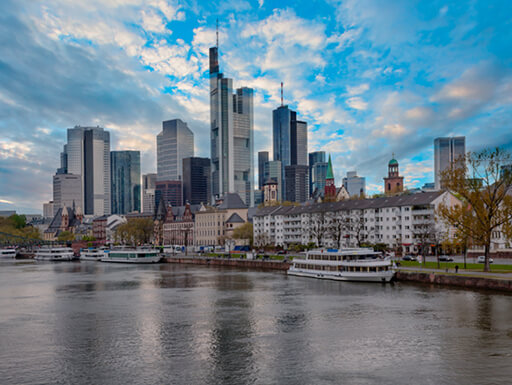 Day Two – Shock of the new

You’ll realize after your first glimpse of Frankfurt’s skyline that this isn’t your typical German town. One of the busiest financial centers in Europe, it’s home to big business and banks, including the European Central Bank – earning it the nickname ‘Mainhattan’ (the Main being the river that runs through Frankfurt).

Meticulous modernization has led to a spurt of skyscrapers, none more impressive than the Main Tower. Finished in time for the millennium, it’s a 650ft building with an observation deck that offers stunning vistas. If the fresh air has made you hungry, you can indulge in excellent German food at the 53rd floor restaurant. Again, the views are incredible, and the lunch is almost as good. Chestnut soup, roasted pick perch with fig and a decadent butterscotch chocolate brownie with blood orange sherbet are all excellent choices.

The economic success of Frankfurt has helped gentrify many neighborhoods, leading to some dramatic transformations. The area close to the main train station, known as Bahnhofsviertel, was once notoriously sordid and sleazy. Recently, the former red light district has been turned into a must-see place if you’re into ethnic food, pop-up parties, music in the streets, modern galleries and other hip happenings.

Edge your way into the popular Montana for Neapolitan pizza worthy of the name, or try sushi at Bento. You’ll also find some of the best Indian dishes in the city at Eat Doori, which adopts a relaxed feel along with its street-food approach.

Fill your afternoon and evening with some culture. Visit the house where the storied statesman and writer Johann Goethe, Frankfurt’s favorite son, once lived. Next door, the Goethe Museum is a fantastic nod to an entire history of German art, taking you on a tour from the Baroque to the Biedermeier era.

Music lovers should check the schedule and book a ticket at the Old Opera House, a perfect contrast after visiting the best of new Frankfurt. Built in an Italian Renaissance style, it only just limped into the new century. The 18th-century building was ravaged by war and was originally scheduled for demolition. Thankfully, it was refurbished and rebuilt, and the mahogany-strewn interior and world-class acoustics attract major international talent. 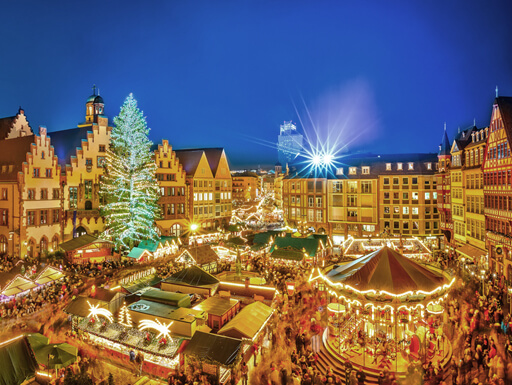 Feed your soul first with art at the esteemed Stadel Museum. Many of the pieces here were once branded degenerate by the Nazis and confiscated. Later, surviving masterpieces were relocated once more to avoid Allied bombing. It’s a wonder that this museum, first opened in 1815, can still boast such a stunning 700-years-worth of art. Soak in work from Rubens, Botticelli, Matisse, Rembrandt and Vermeer. There’s great sculpture too, and probably more to see than you’ll even have time for.

There’s little point taking those euros back home, so book a table at Lafleur, a stunning two-Michelin star restaurant situated next to Palmengarten. Visit the tropical hot house here first, sample the heady scent of the flowers and rare species before eating roasted scallop with quinoa and black truffle.

Still got a little time left? You could catch a theater performance at the Schauspiel, which hosts a range of classic and contemporary shows on its four stages. While it’s German language, you can arrange packages that include English subtitles. Culture, great food, timeless art – let these be your lasting memories of Frankfurt.