From modern-art gems in the north to regal Castel Nuovo in the south, Naples’ historic center is compact enough to navigate like a local. Here’s how to best explore its range of fantastic neighborhoods.

See Naples and die, goes the Italian proverb. But it seems painter and writer Arthur John Strutt had a better idea when he said: “See Naples and live; for there seems a great deal worth living for.”

It’s true, the Grand Dame is full of surprises – there’s a lot more to see than even the Naples tourist information guide will tell you.

With its chequered past and rough-around-the-edges reputation, Italy’s third-largest city is looking fresher now than it has in a long time. But while old Napoli is increasingly hailed as the country’s most underrated city, times are changing.

In-the-know visitors are now flocking to the Campanian capital – that romantically crumbling, intoxicatingly Italian city of your dreams – so get there soon. And when you do eventually visit Naples, be sure to get your bearings: 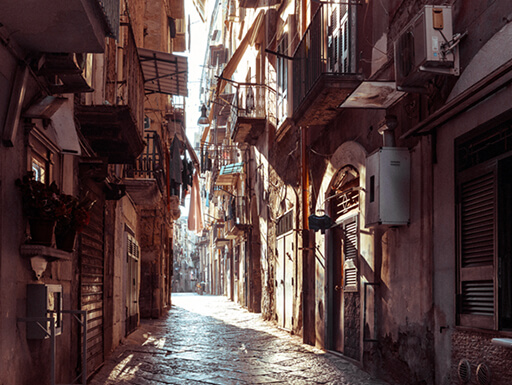 For art and architecture: Northern Naples

It’s a good start when you step into Naples’ northern district and come face-to-face with some of the most masterful craftsmanship in the city. Step inside the 19th-century facade of Duomo, a column-bolstered cathedral, where you’ll find the relics of San Gennaro, Naples’ patron saint.

The area is also home to Pio Monte della Misericordia, a small-but-mighty church that houses Caravaggio’s Seven Acts of Mercy – considered one of the most important paintings in Naples.

Move from frescoes to pop-art at MADRE, or the Museo d’Arte Contemporanea Donna Regina Napoli to give it its full title. Get to know your Warhols from your Lichtensteins as you wander through contemporary collections also featuring works from the likes of Robert Rauschenberg and Claes Oldenburg.

Art enthusiast or not, it would be remiss to leave Naples without seeing Sammartino’s Veiled Christ in the flesh. It’s hard to comprehend that this sculpture is made from marble – everything from the indents in Christ’s corpse to the veil that shrouds him is hauntingly realistic. You’ll find it in Cappella Sansevero, a tiny 16th-century chapel with a blend of Christian and Masonic symbolism. 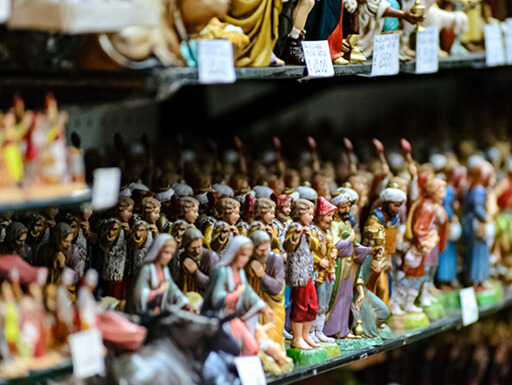 This central warren of cobblestone lanes is a place where 14th-century churches spill into pretty piazzas, sopranos belt out from red velvet opera halls and where some of the finest pizzas in the city emerge piping hot from ovens.

Founded by the Greeks and continued by the Romans, centro storico is old town Naples at its finest. If you’re trying to plonk yourself in the heart of Naples’ historic center, you’ll find it bordered by Via Tribunali to the north, Via Duomo to the east, Via Toledo to the west and the coastline to the south.

Naples’ historic district is as kooky as it is ancient. Take Via San Gregorio Armeno, or ‘Christmas Alley’ as it’s known to visitors. Pint-sized Virgin Mary models stuff the stalls of this eternally festive street and figurines become more eclectic as the year goes on. Have a good nose around and you’ll spot everyone from the Obamas to Steve Jobs among the kitsch trinkets.

For some of the best street food in Europe, head to Spaccanapoli – Naples’ famous lengthy street that bisects the neighborhood. Those who brave the crowds in this buzzing street are rewarded with crispy ricotta-stuffed sfogliatella, rum-drowned babas, and deep-fried pasta cubes, known as frittatina. Not all at once, of course, but they’re all well worth a try.

Of course, you can’t visit the birthplace of pizza without a slice of the action. If you can only do one place, make it L’Antica Pizzeria. Founded by Salvatore Condurro in 1870 and still run by the same family, it’s touted as one of the best pizzerias in the world. And boy does it live up to the hype. The choice is simple – plump for a marinara, with that thick crust for which Naples’ pizzas are famed.

Teatro di San Carlo – one of the most famous opera houses in the world and the oldest to run continuously – is an essential stop when you visit Naples. If you’re lucky enough to land in season, make sure you book tickets to a show. Alternatively, a guide will show you round and tell you everything you need to know. 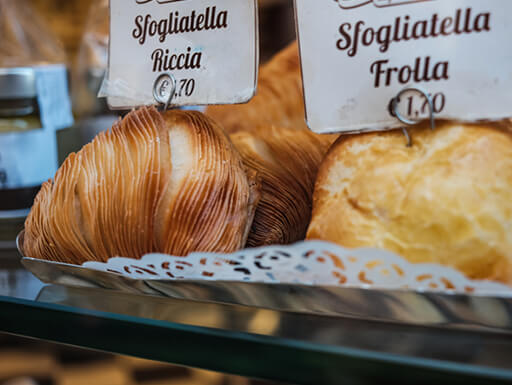 Get your bearings – the royal side of the city can be explored near to the center and close to the seafront in southern Naples. While it’s home to some of the boldest castles in the country, there’s still an air of funkiness here, particularly in the neighborhood of Monte Echia.

Check out Castel Nuovo, a triumph of architecture where stories of bloodshed and beauty seep through the walls. During the day, have a wander round the laundry-strewn Spanish Quarter for a true taste of Neapolitan life. This chunk of cityscape is also where you’ll find one of Europe’s first and most beautiful botanical gardens – sniff out the flora before some retail therapy in the nearby shopping street.

Catapult yourself straight into the age of Naples as an empire: the icing on the cake lies inside Palazzo Reale, or the Royal Palace of Naples. No wonder Hollywood asked to borrow its staircase; this handsome building will take your breath away with Baroque gorgeousness.

Trust us – you won’t tire of marble wonders in the southern district. Even the coffee shops are beautifully sculpted from it, particularly Gran Caffe Gambrinus at Via Chiaia 1-2. Order a satisfying jolt of espresso at Naples’ oldest cafe, which overlooks the leafy Piazza del Plebiscito for an ideal people-watching location.

After that, you’ll be ready to admire the Chiesa di San Frascesco di Paola in the piazza. Fans of Roman travel may recognize the sculpture from the Eternal City – that’s because it’s pretty much a copy of the Pantheon itself.

Castel dell’Ovo also sits in southern Naples, boasting intriguing exhibitions on a small island facing the Santa Lucia district. Bring your appetite – this seaside castle’s ramparts serve up some of the freshest seafood in Naples.

From north to south, this city’s compact nature means navigating the streets like a true native is a pretty simple affair. Slink into unknown corners when you visit Naples and you’ll see there’s more to Campania’s capital than meets the eye.

Can you recommend some great spots to seek out in Naples? Share your secrets with us on Twitter.