Enjoy A Southern Tradition by Heading to A State Fair

Enjoy A Southern Tradition by Heading to A State Fair

Are you a lover of fried food, carnival games, Ferris wheels, rodeos, and the like? Welcome to your dream come true: a guide to the top state fairs in the south. From Alabama to Texas, these state fairs are sure to entertain, delight, and give you more than your fair share of southern fried comfort food.

Fairs and carnivals are a traditional part of summer life in most parts of the South. There’s nothing quite like riding a Ferris wheel and cheering on your favorite cowboy at the rodeo. Whether you want to share the fun with your kids or just feel like a kid again yourself, these top state fairs show you what old fashioned fun in the South is really like.

Is it accurate to call it a state fair when it attracts visitors from all over the country? That was the question organizers of the Alabama National Fair asked themselves when they changed the name in 1997 from its previous title of South Alabama State Fair. Along with the midway rides and funnel cakes, the fair has a distinct Alabama vibe. Soak up local culture by taking in a lumberjack show, watching pig races, and visiting Grandpa’s Farm.

The Georgia State Fair has entertained crowds for more than 170 years. Now located at the Atlanta Motor Speedway — a racetrack 20 miles south of Atlanta — the fair runs from late September to early October and celebrates all things agriculture. Attractions include traditional entertainment like rollercoasters and a petting zoo along with the unusual like speed boats, camel rides, and even a circus train. If you find your way out of the maze of mirrors in time, catch a show featuring one of country artists that headline each night. 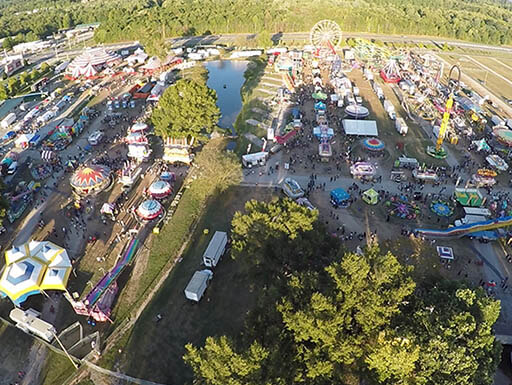 Capture the essence of the Bluegrass State at the Kentucky State Fair, held each August on 400 acres at the Kentucky Exposition Center in Louisville. The fair’s most famous attraction — the World’s Championship Horse Show — features more than 2,000 horses and riders competing for more than $1 million in awards. Walk down Main Street Kentucky to see a snapshot of how the state runs, from economics to the arts. 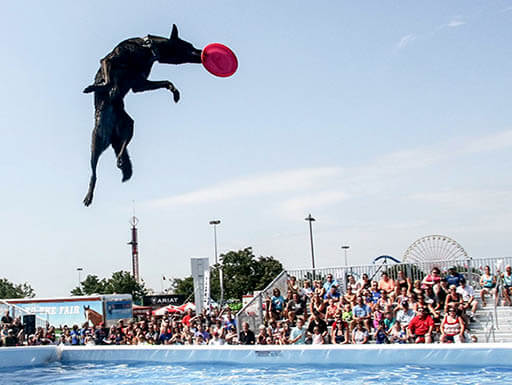 You can even take advantage of free health screenings before catching a show at the theater-in-the-round stage. Past acts have included acrobats, ventriloquists, and comedians. In addition to the traditional special area for kids, this fair also has Heritage Hall, where adults 55 and older enjoy complimentary coffee, dancing, and games.

The city of Shreveport comes alive every fall for two weeks as more than 400,000 people visit the State Fair of Louisiana. As you wander the fairgrounds, you might run into a magician, clown, escape artist, or someone called Dallas The Fire Guy — one of many street performers. The entertainment lineup varies each year, but perennial favorites include the pirate parrot show, racing pigs, and a youth BB gun competition. Don’t miss the rodeo and the antique tractor pull, both classic Southern experiences. On the educational front, exhibits show kids how food and clothing come from fields, forests, and livestock — and not just from a store. 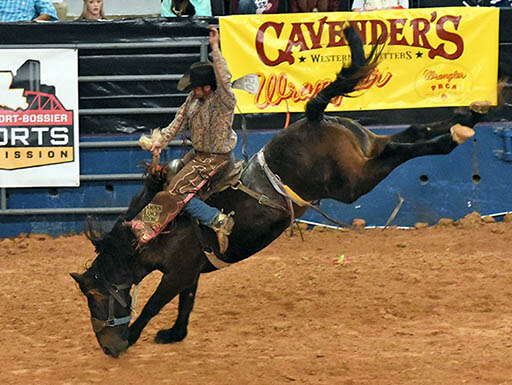 Try one of the carnival games at the Mississippi State Fair, and you might go home with a prize as simple as a goldfish or as impressive as a grandfather clock, depending on the game. If you don’t want to compete, there are plenty of opportunities to watch others show off their skills. Watch cooks vie for first place in the barbecue cook-off or a behold a trained dog catch a fish in the water. It all happens in downtown Jackson every October. 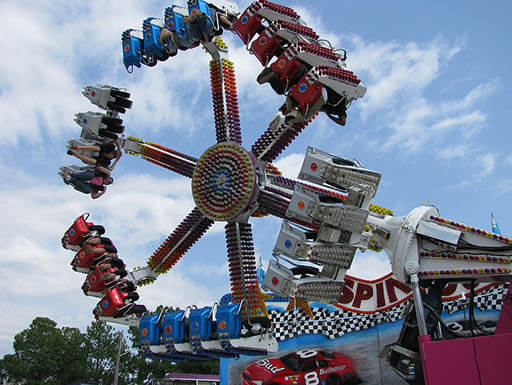 With one of the largest mobile midways in the country, the North Carolina State Fair offers thrills for the whole family. Slide, swing, and twirl to your heart’s content on 100 carnival rides. One of the newest — the State Fair Flyer — takes passengers into the air for a scenic ride above the lights. The fair also includes a folk festival featuring clogging, banjo instrumentals, bluegrass, country line dancing, and more. 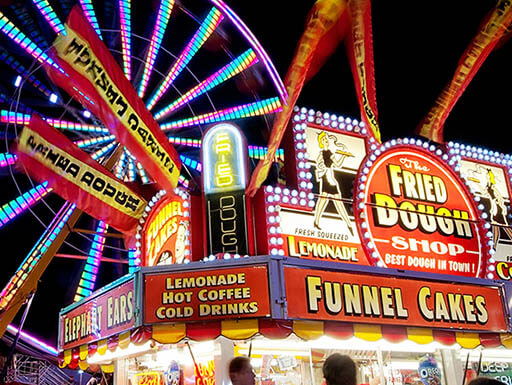 The largest event in the state, the South Carolina State Fair, spotlights exhibitors from every county. The fair has a farm focus and features competitions for best livestock, poultry, agriculture, and flowers. If you’re a thrill seeker, get a wristband for unlimited rides. You can also watch the contests — like extreme pumpkin decorating — or catch a live show on the stage. The fair supports educational scholarships for local youths. 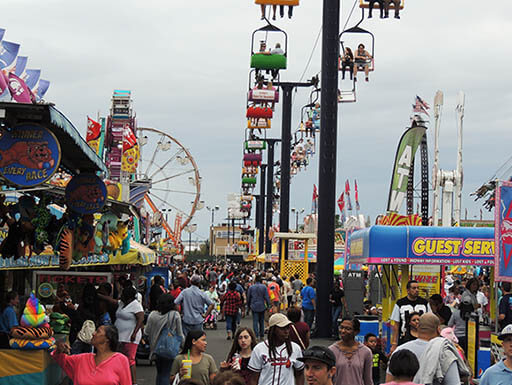 The Tennessee State Fair dates back more than 150 years, but each September it’s a little different. The organizers develop an annual theme that they announce at the beginning of the year, and then they line up the exhibits, entertainers, and contests to match. From karaoke showdowns to cowboy comedy, the fair is laidback and convivial. Toward the close of the 10-day festival — once you’ve loaded up on corn dogs, fried PB&J, and barbecue — sign up for the Funnel Cake 5K. It starts from the fairgrounds and ends with free funnel cake for all. 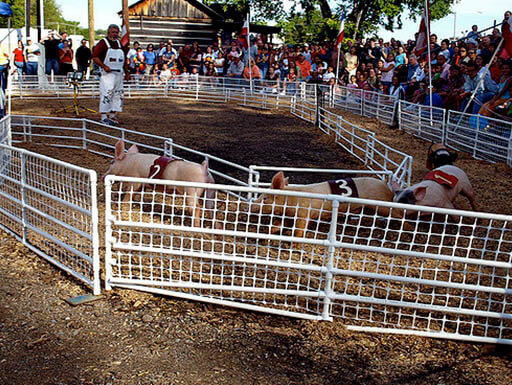 When cooler weather sets in, more than 3 million people flock to Dallas for the State Fair of Texas, making it the largest state fair in the country. It has all the staples: livestock shows, classic cars, a midway full of rides, and a massive chili cook-off. Flower lovers enjoy the Fall Garden Program, spotlighting the work of more than 40 landscapers and featuring special displays inside the greenhouse. 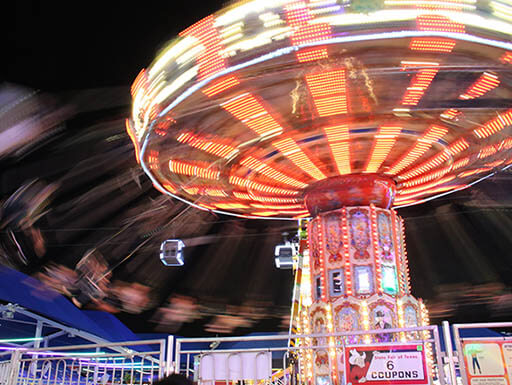 Fair Park, the 277-acre site for the event, is a National Historic Landmark filled with attractions like museums and historic buildings that offer special programming for fair-goers in addition to the daily lineup of things to do. Themed itineraries are available in both English and Spanish to help you make the most of your trip.

Which Southern fair is your favorite? Tell us your vote on Twitter, and get more travel tips for your next getaway.