Visit Scotland’s capital city for a feast of spellbinding architecture, fascinating museums and one of the most famous festivals in the world.

Scotland has been voted the most beautiful country in the world and when you’ve experienced its dramatic hilltop castles, breathtaking lochs and wild beaches, you’ll find it hard to disagree.

Nowhere is the beauty of this dramatic country more apparent than in its capital city Edinburgh, where history seeps from every street. The gothic architecture, stunning surroundings and one of the world’s best festivals make this an unmissable place to visit. Whether you want to spend a weekend in Edinburgh or longer, the following top 10 will keep you busy…

The skyline of the city has been dominated by this epic hilltop castle since the 12th century, and many set their watches by the daily 1pm gun salute. The castle is perched on top of an extinct volcano and offers glorious panoramic views of the city.

Highlights include St Margaret’s Chapel, the National War Memorial, the Scottish Crown Jewels and the famous Stone of Destiny, returned from London in 1996. This is the most visited attraction in Scotland, so be sure to get there early to avoid the lines or buy tickets in advance.

The castle sits at the top end of the Royal Mile, Edinburgh’s most famous street and home to many of its best attractions. Starting at the castle, going downhill is the most enjoyable route – although the fact that the Scotch Whisky Experience is just a decent toss of the caber away means you may not get too far.

Further down is the site of the 17th century Scottish Parliament and spectacular St Giles Cathedral. Opposite you’ll find the entrance to Mary King’s Close, a step back in time to a perfectly preserved version of 17th Century Edinburgh. Other attractions include the Brass Rubbing Centre and the Museum of Childhood. The Royal Mile ends at the Palace of Holyrood House and science center Dynamic Earth.

If you enjoy a ‘wee dram’ (a little drink) then head to this attraction and console yourself that your interest in whisky is purely cultural. Resident ghost Master Blender takes you through the history of the drink and the highlight is the barrel ride through 300 years of production. The museum has the world’s largest collection of Scotch Whisky and a tipple is included at the end of the tour. It would be rude not to sample it. 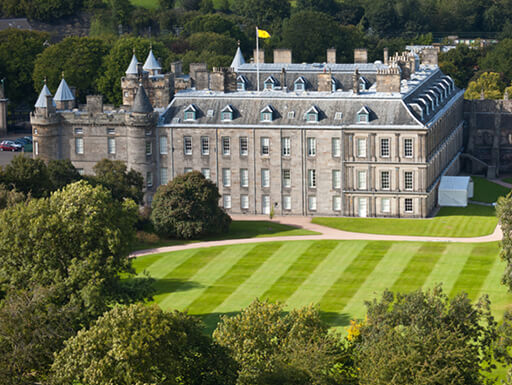 The end of the Royal Mile lands you at the Queen’s official residence in Scotland. Holyrood House originates in the 12th century when it was first founded as a monastery, but most of the Palace dates from the time of Charles II, who was crowned in Scotland.

Most impressive for visitors are the 17th century apartments, including Mary Queen of Scots’ bed chamber and the Great Gallery of 89 portraits of Scottish kings. The ghost of Agnes Simpson, executed for witchcraft is said to roam the palace, so watch out! 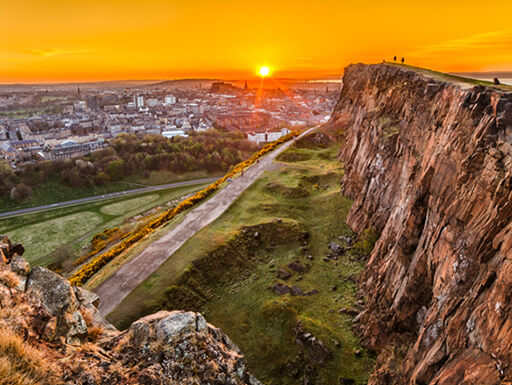 Beside Holyrood House is the entrance to this park, the best place to escape the bustle of the city. Pass St Margaret’s Loch through wild, dramatic landscape to the top of Arthur’s Seat, an extinct volcano that keeps watch over the city from 800 feet up.

There are sweeping views of the Firth of Forth and Ben Lomond, and it’s amazing to realize that you’re only one mile from the city center. The area is popular with rock climbers as well as walkers.

The merger of the Royal Museum with its modern neighbor has created a huge collection of some 20,000 artifacts – all of which can be viewed for free. From ancient Egyptian relics to an early form of guillotine, Elton John’s stage outfits and the remains of Dolly, the world’s first cloned animal, it’s a fascinating and diverse museum. The contrast between the two adjoining buildings is striking and there are regular exhibitions on everything from Scottish kings to natural history, art and technology.

Next to Waverley Station, at the foot of the Mound on Princes Street, the Scottish National Gallery houses one of the best art collections in Europe, from the Renaissance through to Post-Impressionism. Masterpieces by Monet, Cezanne, Rembrandt, Degas and Van Gogh are accompanied by an outstanding Scottish collection, including well-known works from Raeburn and Ramsey.

The National Portrait Gallery, a couple of blocks away, is another highlight. Don’t miss the huge processional work depicting many of Scotland’s most famous people – from Bonnie Prince Charlie to Sean Connery.

One of the city’s most iconic Gothic landmarks, this is the largest monument to a writer in the world. Dedicated to Sir Walter Scott, whose works include Ivanhoe and Rob Roy, it took four years to construct, looming large over Princes Street Gardens. The sculpture shows the author seated and there are some 64 characters from his novels built into the monument. Climb the 287 steps to a series of platforms for impressive views of the city.

If a thrilling, scary trip through history floats your boat then head to the Edinburgh Dungeon for depictions of the most grisly aspects of Scotland’s past. The acting is impeccable and the special effects excellent, creating a gripping 80-minute experience. Plagues, torture chambers, graveyards and ghosts await, culminating in a mock execution. It’s not for the faint-hearted so if it’s not for you, catch your breath in the nearby Princes Street Gardens.

The busiest and most exciting time to visit Edinburgh is during the festivals in August. Media and celebrities flock from around the world to see the best music, theater, opera, dance and comedy. There are actually two festivals, the most famous of which is the Edinburgh Fringe, the world’s largest arts festival with over 50,000 performances in 300 venues.

The streets are filled with performers, and bars packed with the creative community. One of the highlights is the comedy program where many famous comedians have launched their careers, including the likes of House star Hugh Laurie and TV host Trevor Noah.

Do you have a favorite Edinburgh attraction? Tag us in your best photos from Scotland’s capital on Instagram.