From fairytale villages and hip hangouts to areas of timeless beauty, check out this travel guide to exploring Edinburgh’s best neighborhoods.

Edinburgh is one of the world’s most beautiful cities, boasting architecture that ranges in grandeur from neoclassical to gothic. The city’s many parks and hills offer spectacular views and relaxation, while there’s a feast of cultural and historical attractions waiting to be discovered outside of the center.

Tourists may flock to the Old Town to visit Edinburgh Castle and wander along the Royal Mile, but once you’ve seen Mary King’s Close, the cathedrals and palaces, it’s time to uncover the beating heart of the city. Here’s our pick of the best neighborhoods to explore.

A testament to how Edinburgh bursts with history is the fact that its so-called New Town actually dates from the Georgian period. Most of this area was built in the late 18th and early 19th century, and it’s dominated by grand Georgian and neoclassical buildings, including the distinctive clock tower of Edinburgh’s most famous hotel, The Balmoral.

The New Town is the focal point for many aspects of city life: the famous New Year Hogmanay celebrations are centered here, there’s a treasure trove of art on offer at the Scottish National Gallery and the Scottish National Portrait Gallery, while Princes Street is the hub of the city’s shopping. There are more exclusive boutiques on nearby George Street, which is also where you’ll find the heart of the district’s nightlife with a range of high-end spots. Try The Dome, which houses three restaurants and the lively Front Bar, where regulars pick from a wide selection of gins, whiskies and craft and draught beers beneath eye-catching crystal chandeliers.

The South Side of Edinburgh is the university district, so it’s entirely appropriate that the seat of learning is home to the National Museum of Scotland and its diverse collections ranging from Viking artifacts to the work of Scottish designer Charles Rennie Mackintosh.

The university buildings are based around George Square and Bristo Square, and there are also some unusual museums – from the slightly unnerving Surgeons’ Hall Museum to the Museum of Fire, which tells the story of the world’s oldest fire brigade.

As expected for an area full of college students, you’ll find some quirky places to eat here (particularly if you’re hankering for Asian food), and of course plenty of pubs.

The Meadows public park is the perfect place to unwind during the day, and also has frequent events, hosting festival performances and an annual marathon. At night, head to the South Side to catch a performance at the 2,000-capacity Festival Theatre.

Those unfamiliar with the city don’t think of Edinburgh as a port, but this harbor is just a couple of miles north of the center. With a spectacular setting on the Firth of Forth, Leith boasts top-notch seafood restaurants, dockland promenades and cruise ships.

It used to be Scotland’s most important port, and Queen Victoria visited on her yacht the Royal George in 1842. The Royal Family’s presence is felt everywhere – you can have some fun seeing how many references you can spot in the names of the streets and quays.

The biggest tourist attraction is The Royal Yacht Britannia, permanently retired at Ocean Terminal after more than 1,000 voyages to far-flung destinations around the world. You can see the luxury that Queen Elizabeth II enjoyed and take tea and scones on deck. Get there early to avoid the lines or reserve tickets in advance.

In the town itself, a statue of poet Robert Burns dominates Constitution Street, while the spacious park of the Leith Links is the perfect place for some rest and relaxation after taking in the sights.

This former village is now a busy residential area in the north-west of the city with cobbled streets, classical buildings and upscale shopping. The biggest tourism draw here is the Royal Botanic Garden. Dating back to the 17th century, you’ll be surrounded by over 13,000 plant species. Highlights include the Giant Lily Pond, the Chinese Hillside and the exquisite glasshouses.

After taking in this array of horticulture, enjoy a walk along the Water of Leith. This is the city’s major riverside walkway, recently restored to its former glory. Don’t miss St Bernard’s Well, a circular Roman temple with a statue of Hygeia, the goddess of health. The river also hosts a rather bizarre annual duck race when over 1,000 rubber ducks are raced for charity. 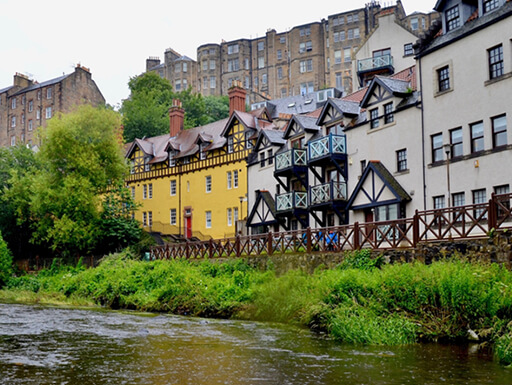 Nestled in a leafy gorge on the Water of Leith, this quaint fairytale village began life as a mill, and is now one of the most desirable places to live in Edinburgh. It’s a beautiful place to spend a few hours uncovering plaques and historic buildings near the four-arched Dean Bridge. The biggest tourism draw is the Scottish Gallery of Modern Art, housed in two grand neoclassical buildings.

Within its walls you’ll find more than 6,000 paintings, sculptures and installations, including works from Matisse, Picasso, Magritte, Dali, Hockney and Warhol. The outdoor sculptures and extensive grounds are a particular delight, and the adjacent Dean Gallery has further surrealist works. Further up is Dean Cemetery where many famous Scots are buried, including Dr Elsie Inglis, one of the founders of the Suffragette Movement.

Just east of the center, between the New Town and Old Town, Calton Hill offers one of the best viewpoints in the city and is a must-see for its cluster of historic buildings and monuments. The Nelson Monument was erected in 1807 to celebrate the British admiral’s victory against the French and Spanish in the Battle of Trafalgar.

Climb the spiral staircase for panoramic views of the city, and watch the giant Time Ball being dropped daily at 1pm. The ball was designed to act as a signal to ships in the 19th century, and coincides with Edinburgh Castle’s gun salute.

Another key landmark is the incomplete National Monument. A national memorial to the Scottish soldiers and sailors who died in the Napoleonic Wars, it was meant to resemble the iconic Parthenon of Athens. Instead, the public lost interest, the money dried up, and all the Scots could muster was a dozen pillars. It has been left unfinished since 1829, earning it the tag of “Scotland’s shame”.

Take a picture from the top of the hill and you’ll want to include the impressive Dulgald Stewart Monument, its circular temple based on Ancient Greek designs. Set against the backdrop of the city beneath, it forms one of Edinburgh’s most iconic images.

Have a favorite place in Edinburgh? Comment on Facebook to let us know which areas you love the most in the Scottish capital.