Kyoto, Japan, is a must-visit for anyone interested in ancient Buddhist temples and Shinto shrines, tearooms, museums, zen gardens and stunning scenery.

Although most major Japanese cities have fully succumbed to modernity, Kyoto hasn’t lost sight of its roots. Once Japan’s capital, this city of more than 1.5 million people clings to centuries of tradition while staying current in modern Japan.

“Kyoto is really the heart of the nation,” says Eleanor Yamaguchi, Associate Professor at Aichi Prefectural University and Kyoto resident for nearly 15 years. “Even today you can get a sense of the history of Japan just by walking the streets of Kyoto. It’s the one place where traditional sits right next to modern.”

Home to more than 1,600 Buddhist temples and 400 Shinto shrines, Kyoto is a must-visit for anyone interested in religious architecture. It’s also home to a full range of Japanese cuisine, ancient specialty shops and tearooms, excellent museums, and stunning scenery. If you want a taste of old Japan, then you’ve come to the right place.

In the Northern Higashiyama district, a massive San-mon (gate) greets you as you approach the Zen Buddhist temple Nanzen-ji, one of the region’s most frequently visited temples. The spacious main hall is a national treasure. The expansive, luxurious grounds contain the Leaping Tiger Zen garden, numerous subtemples, and a secret waterfall grotto.

If you visit Kyoto in spring or fall, then try to attend one of the many illumination events held at temples and shrines throughout the city. Shorenin Monseki illuminates an especially magical blue light from its temple.

Tofuku-ji features a spectacular garden, 24 subtemples, and the oldest San-mon in Japan. Take a Zen meditation beginner session here — in Japanese only.

The Japanese intended the Shinto shrines to house one or more spirits and to safeguard sacred objects. Heian-jingu features replicas of the Imperial Court Palace of the Heian period (794–1185). Explore the shrine buildings and the lush garden, featuring a large pond, bridge, wisteria, irises, and cherry trees.

Shimogamo-jinja, a UNESCO World Heritage Site, lies in the midst of a wooded area that is said to be a good place to sort disputes because you can’t hide lies here. “This is my favorite shrine,” says Yamaguchi. “It’s fairly well known but not usually crowded with tourists.” 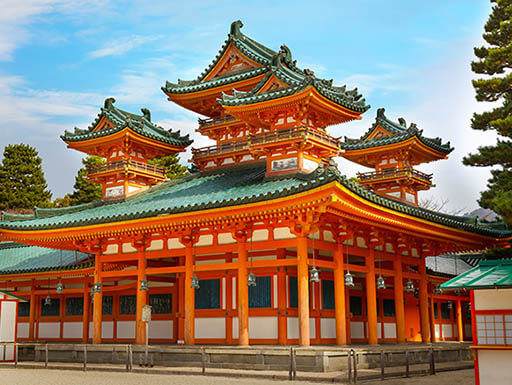 Fans of samurai films and anime will get a kick out of Toei Kyoto Studio Park, a theme park of sorts where you can walk around the Toei Kyoto Studio film set. You’ll see a street from the Edo period used to shoot more than 200 films a year.

Kids will have fun with the Iga-ryu throwing contest, where they aim to hit a target using a real ninja weapon. They can also test their agility on the Sword ‘N Go obstacle course and the 3D Ninja Fort.

If you’re looking for a more natural type of park, then Kyoto has an abundance of them. Walk or ride a bike through the Arashiyama Bamboo Grove. The thick green stalks tower above you unlike any other greenery. On the way, visit the Tenryu-ji Temple, which is nearby. 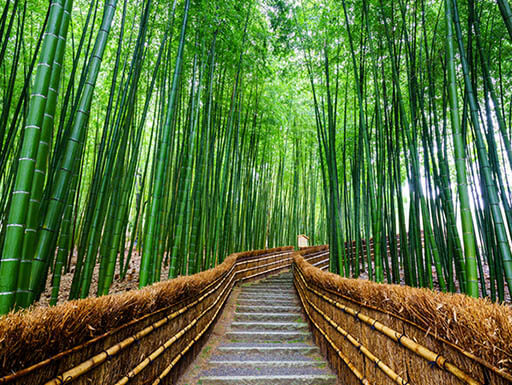 Fuel for Your Visit

Whether you have a day or a week in Kyoto, a visit to this captivating city will give you a sense of traditional and modern Japan against a lush natural backdrop.