From world-class museums to cheeky statues and tasty treats, there are many great ways to experience Brussels, Belgium between business meetings.

In Europe’s grand city of Brussels, where Art Nouveau architecture towers majestically over picturesque squares and gardens, it’s not hard to find something to love. From world-class museums to cheeky statues and tasty treats, Belgium’s capital is an ideal spot for maximizing your downtime between business meetings. Many of the city’s attractions are within walking distance of each other. So brush up on some French (or Dutch) phrases and enjoy a quick visit through this city.

A UNESCO World Heritage Site, La Grand-Place features a stunning display of 17th century ornamental architecture in a group of buildings that serve as the city’s commercial and political hub. Rebuilt after Louis XIV’s troops crumbled the square in 1695, the restored Hotel de Ville (City Hall) bell tower is the most famous landmark in La Grand-Place. In mid-August every other year, the plaza comes alive with color when more than 500,000 begonias blossom and create a breathtaking floral carpet. If you miss the main event, visit the daily flower market in La Grand-Place to find some flowers to cheer you up. 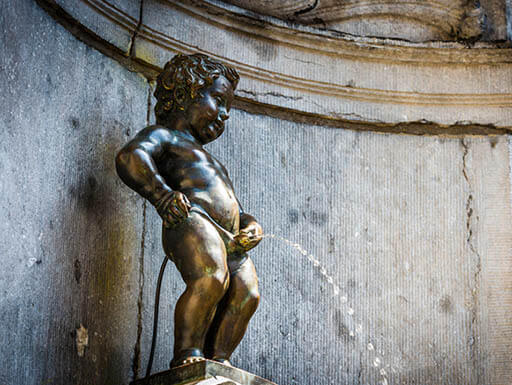 After visiting the impressive plaza, Brussels’ most famous — or infamous — statue might surprise you. Nonetheless, no trip to this city is complete without seeing Manneken-Pis (little man pee in Dutch). As you might imagine from the name, the statue depicts a naked young boy “urinating” a constant stream of water. First a hilarious drinking fountain, the statue has become a beloved fixture that has endured the test of time. During holidays and events, city officials have fun dressing the statue in more than 900 different suits, demonstrating the city’s joyful spirit. From La Grand-Place, walk just a few blocks south on Rue de l’Etuve to see the notorious bronze landmark.

Just across the Boulevard de l’Empereur is the infinitely more holy sight of Cathedrale St-Michel et Ste-Gudule. Originally built in the ninth century to pay homage to Archangel Michael, this fully restored Romanesque cathedral features stone and Gothic-style stained glass. The towers, which stand 64 meters (about 210 feet) tall, were part of on-going additions completed in 1519. Often considered one of the most impressive cathedrals in Europe, it houses the mausoleums of the Dukes of Brabant and the Archduke Ernest of Austria.

Masses take place daily, and concerts are scheduled throughout the year. Self-guided tours are allowed when no liturgical services are underway.

Walk from the cathedral along Rue Royale, past the lovely Parc de Bruxelles to find one of the city’s delightful specialty museums. The Musical Instruments Museum, or MIM, has been open to the public since 1878. It offers an impressive collection of exotic and international instruments first cultivated from the private collection of François-Joseph Fétis and King Leopold II. To avoid admission fees, visit the Art Nouveau-style museum on the first Wednesday of the month after 1 p.m. 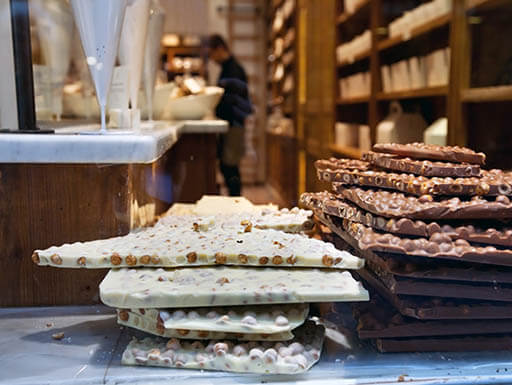 If you have a sweet tooth, you couldn’t visit a better city. Brussels is famous for its chocolate and sweets, a tradition that began more than a century ago when Belgium resident Jean Neuhaus invented the praline. Spend a few minutes in Wittamer to sample century-old recipes for chocolate, pastries, and macaroons before heading to the Place du Grand Sablon, an area overflowing with eclectic antique dealers — and more than a half-dozen chocolatiers.

Have you spent some time in Belgium’s capital city? Share your favorite attractions — and your favorite chocolate — with us on Instagram.