Contrary to popular belief, it is possible to make your car safer and cooler at the same time — with head-up displays. Find out how.

Despite popular belief, it is possible to make your car safer and cooler at the same time. Head-up displays, which have been used in jet fighter planes since World War II, can help eliminate distractions and allow you to keep your eyes on the road.

Today, safety on the road is more important than ever. As mobile devices have become more prevalent, so has distracted driving. In fact, it has become such a problem that many states have banned the use of mobile phones while driving, and the Federal Communications Commission estimates that at least eight people are killed and nearly 1,200 more are injured each day as the result of distracted driving. And phones aren’t the only distraction ― looking down at the speedometer or glancing over at your GPS for a moment can be enough to compromise your safety.

With a head-up display (HUD) your car’s windshield becomes a screen to deliver valuable information, such as your speed, fuel consumption, mileage, and more. It also has navigation features that can include arrows to direct your turns and show you the exact path to take. In some cases, it can even tell you how fast the vehicle in front of you is traveling.

Not the Same Old HUD

Carmakers have been experimenting with HUDs since the 1980s. Chevrolet rolled out the first color HUD for the 1999 Corvette, and the technology has continued improving ever since. Today’s HUDs even let you send and answer texts, make phone calls, and receive updates on news and stocks.

Now included as an option in an increasing number of premium cars, such as BMW, Audi, Lexus, and Mercedes-Benz, HUDs use a small projector to send the information to your windshield. The projected information bounces off a series of mirrors to magnify and flip the image so it’s easy for you to read, and you can adjust where it displays on the windshield. 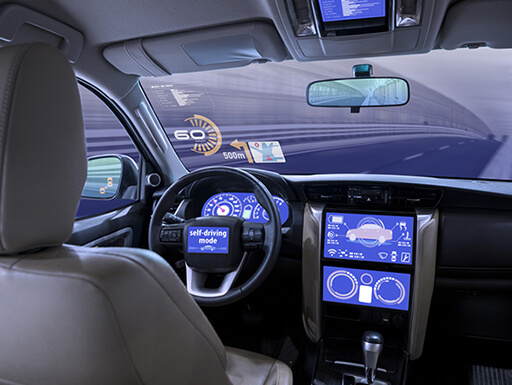 HUDs certainly up your car’s cool factor, but they’re also great safety tools when the weather is bad or there is low visibility due to fog or other conditions. Because they’re connected to systems that use radar and infrared sensors, they can help you “read” the road markings, even if those markings are difficult for your eyes to find.

As the technology becomes more advanced and accessible, HUDs will eventually become an option in more mainstream auto brands. If you’re ready to add it to your car’s features now, then aftermarket options include dash-mounted models. These models project the information either onto a small stand-up screen that you place in front of the steering wheel or onto a transparent piece of film that you apply to the inside of your windshield.

Ready for the Road

Aftermarket HUDs often require a compatible smartphone as your data source for things like navigation, so you’ll have to download the appropriate apps. (When you’re exploring options, make sure you factor in the price of apps into the overall cost.)

Some models come equipped to plug into your car’s computer through your onboard diagnostics (OBD-II) port. The OBD-II, which is likely located under your dashboard, monitors such things as your mileage, speed, and engine functions, so HUDs that connect to an OBD-II can provide you with all of this vital information.

The price of head-up displays can vary greatly, from a basic $25 model to feature-rich displays that cost around $800. Knowing your needs and doing some homework on what’s available can help you find the model that’s right for you.

What tech feature would you most like to have in your next car? Visit us on Facebook and tell us about it.